Human locomotion is essential to move our body through space, not even in everyday life situations and in sports. Hence, many Researchers attempted to get insight into the concepts of human movement during the last decades. Several studies, with healthy and disabled humans, were conducted to investigate the biomechanical effects of economical locomotion (Andersson, Andriacchi & Galante, 1981; Chao, Laughman, Schneider & Stauffer, 1983; Györy, Chao & Stauffer, 1976; Riskowski, 2010). In order to examine specific patterns of human gait it is crucial to pinpoint the basic effects from the multijoined, musculoskeletal and musculoarticular system. This approach led to groundbreaking discoveries, like that the function of the leg during running, hopping or walking behaves like a spring as shown e.g. by Alexander (1990), Blickhan (1989), Farley, Glasheen & McMahon (1993) and McMahon and Cheng (1990). “The advantage of the spring-mass model is its simplicity in studying the mechanical behavior of the musculoskeletal system by using just one spring” (Kuitunen, Komi & Kyrolainen, 2002, p.166). The body mass of the human is affected as a point mass which is attached to the leg spring (see Fig. 1.1) (Alexander, 1988; Blickhan, 1989; Farley, Blickhan, Saito & Taylor, 1991; Farley et al., 1993; Ferris, Louie & Farley, 1998; He, Kram & McMahon, 1991; McMahon & Cheng, 1990). In fact, the gait of the human is realised in a bouncing manner, so that the spring-mass model accesses the overall musculoskeletal behavior in an isolated way (Ferris & Farley, 1997, p.15). 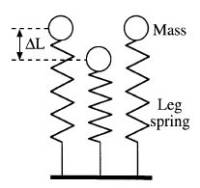 Figure 1: Spring-mass Model The leg is represented as a single spring and the body mass is depicted as a point mass attached to the Leg spring. The ground contact phase is depicted in three different steps (1) start (left-most position) (2) middle (middle position) (3) end (right-most position). The distance ΔL simulates the compression of the Leg spring (Farley et al., 1999, p.268).

This knowledge can be utilised to calculate the stiffness of the leg or joint to observe the foundation of our movement. The “stiffness is the relationship between the deformation of a body and a given force” (Butler, Crowell & Davis, 2003, p.511). As you can see in Fig. 1.1 the deformation is depicted as ΔL which is due to compression of the leg. Various studies occupied this model to investigate the human system and to gain more information in control mechanisms regulated by the central nervous system. Thus, the stiffness is not only the essential element in medical studies (Butler et al., 2003; Granata, Padua & Wilson, 2001; Radin, Ehrlich, Chernack, Abernethy, Paul & Rose, 1978), but also in performance related studies (Alexander, 1990; Kuitunen et al., 2002; Seyfarth, Friedrichs, Wank & Blickhan, 1999). Farley et al. (1993) and He et al. (1991) observed that during forward speed the stiffness of the leg spring remains fairly constant. Moreover, many researches emphasized the dependency between the stiffness and the activity. The result is a higher load of stiffness in order to adapt to the demand of the activity (Arampatzis, Brüggemann & Metzler, 1999; Arampatzis, Brüggemann & Klapsing, 2001a; Arampatzis, Schade, Walsh & Brüggemann, 2001b; Farley et al., 1991; Granata et al., 2001; Kuitunen et al., 2002; Seyfarth, Geyer, Günther & Blickhan, 2002; Stefanyshyn & Nigg, 1998). Another effector of the stiffness is the speed, because a higher velocity leads to a stiffer leg (Arampatzis et al., 1999; Seyfarth et al., 2002). Furthermore the running economy is going to be better with an increase in leg stiffness (McMahon & Cheng, 1990; Kerdok, Biewener, McMahon, Weyand & Herr, 2002).

Recent studies also concluded the relationship between stiffness and performance during hopping in place (Farley et al., 1991; Farley, Houdijk, Van Strien & Louie, 1998; Farley & Morgenroth, 1999; Ferris & Farley, 1997; Haeufle, Grimmer & Seyfarth, 2010; Kalveram, Haeufle, Grimmer & Seyfarth, 2010). The advantage of observing our complex human musculoskeletal system during hopping in place is “… because it follows the same basic mechanics and spring mass model as forward running (Farley et al., 1991) yet has simpler kinematics” (Ferris & Farley, 1997, p.16). Outcomes from this approach were a higher amount of leg stiffness with increased hopping height (Farley et al., 1991; Farley & Morgenroth, 1999) and also with increased hopping frequency (Farley et al., 1991). The major regulator for the leg stiffness during submaximal hopping is the ankle stiffness (Farley & Morgenroth, 1999), but during maximal hopping the knee stiffness is the major determinant (Hobara, Muraoka, Omuro, Gomi, Sakamoto, Inoue & Kanosue, 2009). These studies make clear which joints take control of our movement, though it is still unproven which joints compensate these functions after a mechanical diversification, for example after an amputation. Studies focussing on these aspects were conducted for different locomotions like running (Bruggemann, Arampatzis, Emrich & Potthast, 2008; Hobara, Baum, Kwon, Miller, Ogata, Kim & Shim, 2013; Lechler & Lilja, 2008; Weyand, Bundle, McGowan, Grabowski, Brown, Kram & Herr, 2009) and long jumping (Nolan & Lees, 2007; Nolan, Patritti & Simpson, 2012). The result from Paralympics long jumper Markus Rehm during the German Championship pushes the issue more in the foreground. He won the tournament as amputee against non-amputees, hence the crux is to know, whether long jumpers benefit from their spring-legs or not (Stern.de, 2014).

Observing the human locomotion during irregular perturbation on the ground is a good way to extract the properties of stabilizing the musculoskeletal system (Haeufle et al., 2010; Müller, Grimmer & Blickhan, 2010). Therefore this study focused on the adjustments of the joints during hopping with spring-legs under the circumstances that the ground perturbs up or down and the ankle joint is blocked in relation to hopping without spring-legs. The following hypotheses were examined:

H1: During two-legged hopping in place with spring-legs, the stiffness of the knee is increased when the perturbation platform drops down.

H2: The stiffness of the knee is increased in both cases of two-legged hopping with and without spring-legs after the perturbation platform drops down.

Two healthy sport students participated in this study. Due to a limited space above the head of the participants, only students with a hight under 1.75 m were chosen to ensure their security. The participant had to jump on place with and without spring-legs (see figure 2) on a force plate after an individual warm-up and adaption to the specific spring-leg. 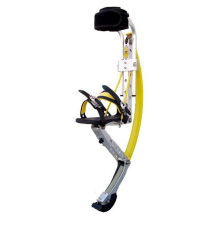 In order to get deep insight in human regulation during movement, kinematics and dynamics data were collected by using a motion tracking system with 10 cameras and a sampling frequency of 500 Hz, a force plate with a rate of 1000 Hz and an EMG with a sampling frequency of 2000 Hz. The reflective markers were placed on bony landmarks and each spring-leg (for further detail see file attached). In addition to the own body weight the spring-legs have a weight of 4 kg and an optimized recoil for a mass between 70 and 90 kg.

Finally the extracted data was processed using multiple filter algorithms to get a high quality signal. Furthermore a drift in the data of motion capturing and force data had to be rectified by observing the first contact. Hence the data was shifted with a calculated offset and mapped together. Subsequently the joint stiffness was calculated to get insight in human regulation processes by using an inverse dynamic approach (Chowdhury & Kumar, 2013). In this case the center of mass was calculated for hopping without spring-legs and estimated for hopping with spring-legs. At the end three states of hopping were excluded, first the 8th hop, because stable hopping was present and two hops after the perturbation. All data were averaged for the individual hops for each participant to compare the states with each other.

Figure 3 and 4 are displaying the progression of the force data and the cervical 7 marker in case of hopping with and without spring-legs with respect to the time in frames (500 Hz). In order to get a first insight in the processed data, only the trials with a perturbation of minus four cm are considered and compared to each other (for further insight please look at the thesis on top).

b. hopping parameters for one given height … 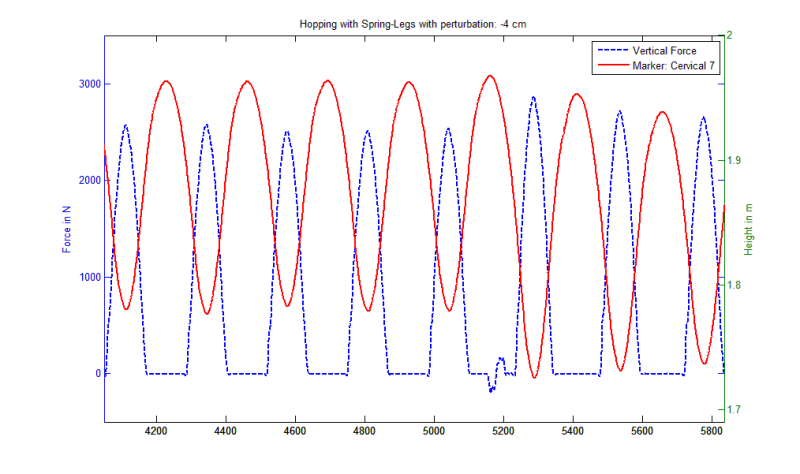 Figure 3: Hopping with Spring-Legs on place with perturbation 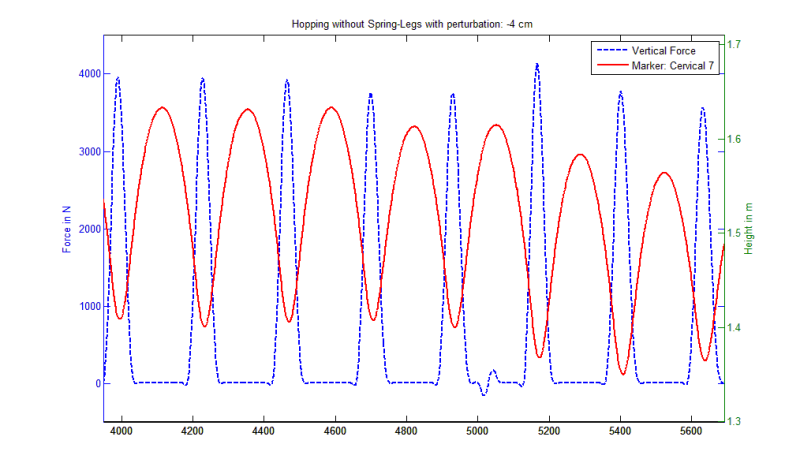 Figure 4: Hopping without Spring-Legs on place with perturbation

The goal of this study was to observe the change in human leg function in vertical jumping. In this case the knee function during hopping in place with spring-legs was observed and processed. Mechanical variations are possible on condition of an amputation, hence our human biological system has to adapt to the new situation.

H1: During two-legged hopping in place with spring-legs, the stiffness of the knee is increased when the perturbation platform drops down.

H2: The stiffness of the knee is increased in both cases of two-legged hopping with and without spring-legs after the perturbation platform drops down.

Comparison to other Studies

Different phenomenons were present in the collected data. Figure 3 and Figure 4 displaying the “terrain following strategy” described by Kalveram et al. (2010). Here, it seems that the distance between the ground profile and the maximum hopping height is constant (Kalveram et al., 2010, p. 1). The contact time between hopping with spring-legs and normal hopping is different. This issue is discussed in media because of the recent results from Paralympics long-jumper Markus Rehm during the national Championship in Germany for non-disabled long-jumpers. The storage of elastic energy is generated by a longer contact time, so the spring deflection increases. Decreasing the ground contact time during two-legged hopping leads to a stiffer leg (Farley et al., 1998, p. 1044). Responsible for decreasing the ground contact time is the higher stiffness in the ankle joint (Kuitunen et al., 2002, p. 171).

Knee stiffness during hopping with spring-legs

Knee stiffness is calculated by the knee peak moment divided with the knee angular displacement. The processed data revealed that the knee stiffness for all participants and there given heights increased significantly. The higher amount of stiffness is due to a higher peak moment (see Figure 3 & 4) and a smaller change in knee angle. The participant encounters the ground level with a more extended leg than in normal hopping, so the change in knee angle remains quite small. Based on the downward movement of the force plate, the flight phase increases and a higher impact to the musculoskeletal and musculoarticular system is generated. This is the clue why the knee peak moment increases despite a smaller lever arm. Hence, the knee compensates the higher impact because of high eccentric force properties. The knee joint is the actuator for damping the human system. Not even in hopping (Farley & Morgenroth, 1999) but also in running the ankle and knee stiffness adapting to an altering grounds (Müller et al., 2010). Therefore, the data indicates that the hypothesis H1 is proven.

Knee stiffness during hopping without spring-legs

Due to a drift in force and motion capturing data, no reliable information could be processed, so the hypothesis H2 remains unclear. Based on previous researches (Farley et al., 1999; Ferris & Farley, 1997; Müller et al., 2010) the tendency supports the hypothesis but has to be examined in future to gain more information in the control of our movement.

Despite the fact that this study was a pilot research, first insight could be pointed out. However, for further research the design of research should be adapted due to the mechanical issues, e.g. to solve the problems with the perturbation platform. By creating a design which is stable, more participants could be evaluated. Also a certain amount of training with those spring-legs could be positive influencing the results, due to a better usage. In addition to it more data could be collected and processed, e.g. the nervous system which might be is responsable for stabilisation issues. Also the collaboration of muscle-tendon due to balancing effects. However, further projects and reasearch can learn from this approach to maximize the succes of measured data and derive new consequences.

For a detailed list of all references please look in the file attached [on top of this site].