The fear of falling due to changes in gait leads to a decrease in quality of life in Parkinson’s patients [RAH2008]. 13 % of all Parkinson’s patients require medical treatment due to falling each year [WIE2005]. However, the reasons for the changed walking style still remain unknown.

With a total number of around 6.9 million patients [DOR2018], Morbus Parkinson is the second most common neurogegenerative disease worldwide. Until the year 2030, there will be approximately twice as many Parkinson’s patients worldwide. Morbus Parkinson was first described in 1817 by the British doctor James Parkinson, who called it „The shaking palsy“, [PAR2002]. Apart from the so-called resting tremor, which stands for involuntary shaking movements, Parkinson’s patients face severe difficulties in locomotion. They show a different body posture, smaller movement amplitudes and a lower foot clearance than healthy subjects, [UPD2003]. Parkinsonian walking includes a high risk of stumbling and falling - in Germany, approximately 644 million euros are spent for medical treatment of falls due to Parkinson’s Disease. While Morbus Parkinson is characterized by the degeneration of cells within the basal ganglia, which form a complex network that serves for signal transmission between the brain and and the spinal cord. The connection of the basal ganglia dysfunction and the locomotor deficits in Parkinsonian gait is not fully understood. The aim of the thesis is to represent Parkinsonian walking by a template model and to use the outcomes to draw conclusions for Parkinson's disease and the human locomotion system.

Morbus Parkinson is a disease that is characterized by degeneration of dopaminergic neurons (i.e. neurons that use the neurotransmitter dopamine for terms of signal transmission) within the basal ganglia [BJO2002]. In order to understand basic concepts of Parkinson, one has to know the physiologic function of the basal ganglia and its components. The basal ganglia is a complex network of nuclei that lie in the midbrain. The substantia nigra is the nucleus with the highest affection from Parkinson’s Disease, [FEA1991]. The human brain cortex can be functionally divided into different groups (e.g. motor cortex), which all are connected to the basal ganglia via the striatum and the thalamus, [ROB2012]. These organizational networks form a control structure for the cortex activities. The ones related to movement are defined as oculomotor, motor, limbic and associative loop and are responsible for eye movement, movement of skeletal muscles, emotional references and associating previous experiences with momentary states, respectively, [GRE2017]. Together with the thalamus, the basal ganglia serves for bidirectional signal transmission between the spinal cord and the brain. The basal ganglia receives signals from different brain cortices and determines the excitation of the thalamus, which activates or inhibits signal transfer between spinal cord and brain, [OBE2000]. For movement initiation, the prefrontal cortex is responsible for the voluntary decision making process. It is closely in connection with the premotor cortex, which serves for planning and coordinating a future movement. In order to start a movement, the signal is sent to the basal ganglia, which process the information within its motor loop, which is regulated based on limbic and associative loop states [LAN2012]. In Parkinson's Disease, a high neural loss in the substantia nigra inhibits the movement initiation and leads to a lower movement regulation signal. Note that the inhibition is bidirectional, so also efferent signals are inhibited by Morbus Parkinson, supposedly changing CPG states.

The Virtual Pivot Point (VPP) is a virtual location in which all ground reaction forces coincide [MAU2010]. In physiologic walking, forces coincide over the center of gravity, meaning that the human locomotion system, that has for long time been evaluated as an instable system (see inverted pendulum model [ALE2976]) turns dynamically stable. As the VPP location is a measure for gait stability, a VPP analysis is used in this thesis as well. The VPP analysis is done by drawing the resultant forces from their point of origin (resultant COP from both feet) in relation to the trunk coordinate system. The trunk coordinate system is fixed in the COM and aligned by the trunk axis.

FMCH is a model that represents the human gait within three segments: one trunk segment containing the body mass and a rotational inertia and two massless legs, which show a longitudinal compliance. The legs are connected to the trunk via a hip segment, that is built up of rotational springs with a changeable stiffness. The stiffness is modulated by the longitudinal leg force, which leads to a high hip spring stiffness in phases of maximal force.

The following steps were taken for the representation of Parkinsonian gait with the template model:

However, as in Parkinsonian walking the foot segment is of high importance, an ankle spring is added to the model, which has the same principle of stiffness modulation as the hip spring and which turns it into the so-called FMCHA model (force modulated compliant hip and ankle). 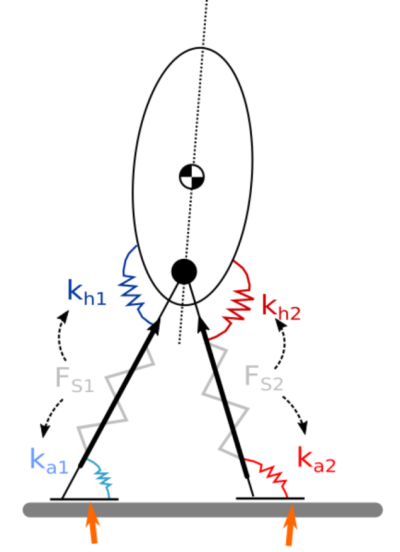 Within the model optimization, the parameters for longitudinal leg stiffness, rotational hip spring stiffness, hip spring rest length, rotational ankle spring stiffness, ankle spring rest length and leg adjustment parameters (= VBLA parameters) are determined. The procedure is done for Parkinsonian and healthy walking. The goal of the optimization is the fitting of force and torque trajectories of measured data. In another approach, the VPP position measured in physiologic and Parkinsonian gait are to be achieved. 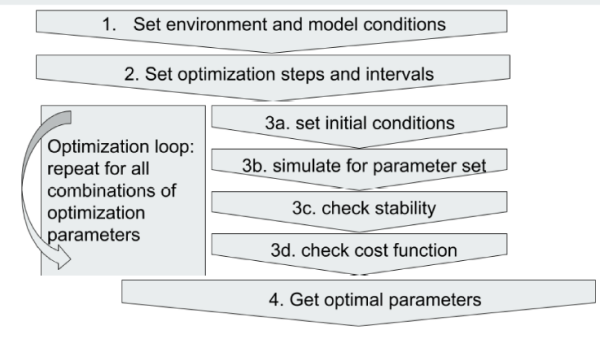 The vertical force in Parkinsonian gait has a triple hump format that cannot be replicated with the FMCHA model. The triple hump is a locomotion state that exists due to constant disturbance to equilibrium. Supposedly, a different cost function may lead to results closer to the triple hump curve.

In Parkinsonian gait, the hip torque is constantly positive and significantly higher than in the model outcomes. No stable walking could be achieved that had similar torque patterns. The optimization outcome that has the highest conformity with the hip torque pattern lies 72 % under the maximal value of Parkinsonian hip torque. Furthermore, it does not represent human walking, as stance duration lies at 95 percent of the gait duration.

In the experimental Parkinsonian walking data, a negative VPP position (= VPP lies under center of gravity) was observed. This VPP location cannot be achieved with the FMCHA model and the utilized simulation procedure. However, as a negative VPP location represents an instable system, such a solution might exist, but not reach the 50 steps of the stability criteria. In [9], a method to adapt hip stiffness for a desired VPP location is introduced. Using Eq. 31, the required hip reference stiffness amounts to -296.2 Nm/rad. This means, that the hip torque behavior is inverted - putting the foot on the ground at an anterior position leads to hip flexion.

Physiologic walking could be reproduced with the model, but no stable solution could be found for Parkinsonian gait. However, an instable solution was able to demonstrate Parkinsonian behavior in locomotion. It is believed that the change in CPG states and reflex gains that result from Parkinson’s disease turn walking instable and thus, conscious actions have to be taken in order to control gait. However, tendencies for reflex patterns in Parkinson’s patients can be drawn: The ankle torque reflex gain is increased, while the hip torque reflex gain is inverted. Here, the importance of sensory signals and their processing in the basal ganglia network becomes clear. Future therapy methods may be based on these aspects. A future investigation of the topic is suggested by the author, by physiotherapists and by neurologists. Main goals of the studies might be the temporal progress of walking symptoms and the impact of high motor control centers on Parkinsonian gait.

The thesis suggests a novel understanding of Parkinson's disease, that may play an important role for the treatment of Morbus Parkinson. A future cooperation with the working group of Eduardo Palermo from Sapienza University in Rome is planned in order to increase the number of patients and to further investigate the conscious movement control needed for stabilization of Parkinsonian gait. The author is currently developing new methods of treating Parkinson's disease in the scope of his startup project „novapace“.