3M-Seminar 2014, Group work, Modelling of a cyclist's leg in Simulink

In competitive cycling, speed and thus success are proportional to power. On a bicycle, the power is equivalent to

the torque on the crankset M and the cadence f, while

The force on the pedal is generated by various muscles and a variable of relationship of resulting levers, angles and speed. In order to maximize the power output and increase performance, these conditions have to be analyzed.

To get started, the system from hip to foot including a crankset will be modelled with one degree of freedom and using one muscle, the quadriceps femoris muscle.

Based on the tutorial on the Simulink model of an arm, the system of one leg including the crankset will be modeled. The following assumptions and simplifications will be made: 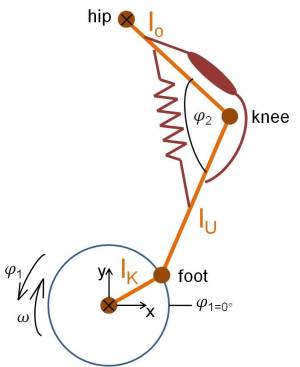