In the world there currently 68 million people in a wheelchair and every year the number rises to 500.000 people more, that become spinal cord injured (SCI). Access to rehabilitation services to maximize overall well-being and community integration has to be improved. One possible solution would be improving access to assistive devices that enable people to perform everyday activities, reducing functional limitations and dependency. Such an assistive device could be an active orthosis or an exoskeleton. In general, the term 'exoskeleton' is used to describe a device that augments the performance of an able-bodied wearer. The term 'active orthosis' is typically used to describe a device that is used to increase the neuromechanical ability of a person suffering from a leg pathology (Dollar & Herr, 2008, 144).

In the following the exoskeleton named Hercule will be presented. This robotic exoskeleton provides the additional support and strength. It is electrically powered and its battery life is about 20 km at a moving speed of km/h with the capacity of carrying 100kg. It can be used by the military but civilian applications are equally important. 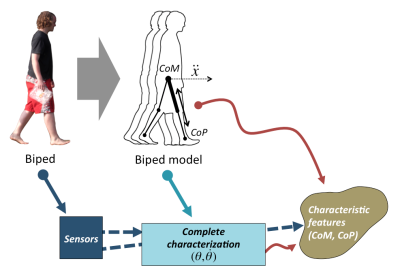 Two-legged standing and walking humans and humanoid robots are examples of bipeds, which as mechanical system are characterized by a relatively high position of their centre of mass compared to their relatively small area of support. Such a system has a limited ability to withstand perturbations without falling over. Supposing that bipeds are in most situations intended to maintain an upright posture, falls are their major failure mode or safety risk, concerning the mechanics of such systems. Hence avoiding falling is also the central issue in the BALANCE project’s system of interest: a human wearing a leg exoskeleton. A human wearing such an exoskeleton is also a biped, and can be considered as a hybrid of a human and a humanoid robotic biped (BALANCE, 2013b, p. 4).

A real biped can be characterized through dynamical models. In this case the biped model (Fig. 1) approximates the dynamics of a real biped. The model can be used to capture the dynamic state of the biped. With the state given, characteristic features like the CoM can be calculated. The sensor system collects additional information to reconstruct the state or the selected characteristic features of the biped under the chosen model assumptions (BALANCE, 2013b, p. 6).

In the following, the 7th Framework Programm (FP7) of the European Commission will be presented. The complete name of FP7 is 7th Framework Programm for Research and Technological Development. It will last for seven years from 2007 until 2013. Some projects are still working, e.g. BALANCE. The FP7 has a total budget of over € 50 billion (European Communities, 2007, p. 6). Below, some projects within FP7 involving the development of active orthoses and exoskeletons are listed. In the further course of this entry the focus is put on BALANCE project.

The goal of BALANCE is to realize an exoskeleton that improves the postural balance performance of humans, targeted at users facing balance-challenging conditions or suffering from a lack of ability to walk or maintain balance during walking (BALANCE, 2013a, p. 5). In the context of biomechanics, postural balance describes the ability to control the Center of Mass (CoM) in relationship to the base of Support. Easy formulated balance ensures that human don't fall under the laws of gravity. In quiet stance the task is to keep the CoM safely withing the base of support, reducing the movement of the center of pressure to a minimum, while the task during walking is to successfully integrate postural adjustments with locomotor strategies to maintain safe gait for a range of tasks of different complexity (Shkuratova et al., 2004).

The exoskeleton, which will be developed within the EU project, should cover two main use cases:

First use of exoskeletons is to support and augment human motor functions. People would no longer need to carry heavy loads over a large distance. Such an exoskeleton could be used in neurorehabilitation, as well as for military purposes.

In addition to the support function of an exoskeleton, it could be used in order to assist people that suffer from mild health conditions during movement. This makes elderly users the primary subjects in this group. It has been reported that decreased visual acuity after age 50, degradation of proprioceptive acuity and decreased muscle strength cause significant postural sway and an increased risk of falls. Through appropriate intervention and rehabilitation, such as neurorehabilitation training risk of falls may be reduced (Hur, 2010, p. 3). But also post-stroke patients which suffer from hemiparesis, meaning an asymmetry in functionality of both legs, could use such an assistive device during neurorehabilitation. Thus, lower extremity exoskeletons for these groups should fulfill two important functions. One is to support progress in walking and the second is to maintain a safe gait pattern to prevent falls. According to the BALANCE consortium (2013a, p. 7), the exoskeleton should reduce the metabolic cost of walking, which effectively will increase the mobility range of this group of users, in the sense of how far they are able to walk.

In the context of design and development of an exoskeleton, the Human Robot Interaction (HRI) place an important role. The fundamental goal of HRI is to develop the principles and algorithms for robot systems that make them capable of direct, safe and effective interaction with humans (Feil-Seifer & Mataric, 2009, p. 2). According to Goodrich (2007, p. 216) the HRI problem is to understand and shape the interactions between humans and robots. Especially in case of wearing an exoskeleton, robotic programs must comply with human movements. In order to ensure a suitable interaction between human and the exoskeleton, three attributes must be considered into detail (Goodrich, 2007, p. 217-229):

The levels of autonomy describe to what degree the robot can act on its own accord. Considering the BALANCE project it is important to take into account what amount of autonomy should be given to the exoskeleton robot depending on the use situations. Within this context, autonomy can be seen as a means to support productive interaction. It will be also important to consider how much cognitive effort is needed from the user in order to cooperate with the system. Preferably the cognitive workload on the interaction should be low. At least, a robot should be able to learn from its mistakes. It is rather impossible to develop and program a customized exoskeleton for each user. Therefore, interactive learning is the process by which a robot and a human work together to incrementally improve perceptual ability, autonomy, and interaction (BALANCE, 2013a, p. 10).

In the following some technical aspects regarding the development of an exoskeleton will be discussed. The state-of-the-art available sensing technologies for bipeds are body distributed Inertial Measurement Units (IMUs). Inertial sensors are used to measure accelerations in translational, as well as in rotational direction. Accelerometers are used to determine the direction of the local vertical by sensing acceleration due to gravity. Magnetic sensors provide stability in the horizontal plane by sensing the direction of the earth magnetic field like a compass (Roetenberg et al., 2013, p. 1). Following table (BALANCE, 2013a, p. 18) shows some more technical issues in the development of an exoskeleton.


In order to estimate the Ground Reaction Force (GRF) and the Center of Pressure (CoP) force-shoes by the company XSENS can be used. The Xsens force-shoe is a fully ambulatory system for 3D measurement of forces and torques under the foot, as well as 3D kinematics of the foot. The Base of Support (BoS) can be estimated by full body configuration, which is known by various sensors placed on exoskeleton and human. In the full body configuration of a human wearing an exoskeleton, both the human and exoskeleton are acting toward the same objective: performing efficiently and safely a functional task. This Human Robot Interaction can be measured by force or pressure sensors. Due to different strategies, it might be the case that both entities are not performing coherent and constructive actions, generating overall system perturbations that can be threatening for the user (Veneman et al., 2013, p. 1).

There are still many challenges associated with exoskeleton development that have yet to be perfected, but the advances in the field have been enormous. Especially in the field of HRI, the nature of human movement needs to be fully understood. According to Dollar & Herr (2008, p. 1) an exoskeleton is an active mechanical device that is essentially anthropomorphic in nature and works in concert with the operators movements. Since the complexity of human movement makes a harmonic interaction difficult, researchers from all over the world are only at the beginning of a long journey of exploration.

Hur, P. (2010). Quantification of the human postural control system to perturbations. Dissertation submitted in partial fulfillment of the requirements for the degree of Doctor of Philosophy in Mechanical Engineering. Illinois: Urbana-Champaign.