Human legs are capable of achieving different locomotion tasks (e.g. hopping, walking, running, etc.) with different ground conditions (e.g. flat ground, uneven terrains, soft ground, etc.). Understanding human leg functions are one of the keys to improve the performance of exoskeletons, prosthesis and bipedal robots. It has been shown that compliant leg behavior can explain basic dynamics of hopping, walking and running gaits. There are several robots have been developed with serial elastic actuators (SEAs) based on the compliant leg concept. MIT cheetah robot demonstrated that the compliant behavior can be emulated with direct-drive (low gear ratio reduction) electric motors. Human compliant leg behavior can be generated by neuromuscular properties and neural control circuitries. Simulation studies from have shown that diverse behaviors of human (e.g. dynamic walking and running gait) can be achieved by a neural circuitry that emphasizes spinal feedback. Schumacher and Seyfarth showed that different reflex feedback pathways lead to different behaviors during hopping with a point mass simulation model. However, it remains unclear if this knowledge is applicable to a real robotic system.

Here, we built a hopping robot with a two-segmented leg and implemented the neuromuscular reflex based control for hopping.

The robot consists of two quasi-direct-drive brushless DC (BLDC) motors which control the hip and knee joint separately in the sagittal plane. To minimize the leg moment of inertia, both hip and knee motors are fixed at the top of the thigh. Knee joint is coupled with the knee motor shaft by a rope-pulley mechanism (gear-ratio 4:1). In order to avoid high mechanical stiffness and friction in the transmission chain, no gearbox is used for the motors. The direct drive actuation ensures the transparency between the motor and the external environment. This makes it possible to achieve relative good torque control performance by motor current sensing (without any force/torque sensors). 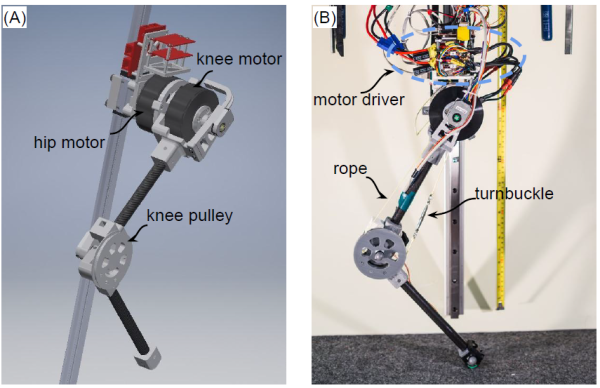 Carbon fiber tubes were chosen as the thigh and shank segment to withstand high load while keep the weight an moment of inertia low. All other mechanical parts, except the screws and bearings, are 3D printed with polylactide (PLA) plastic to further reduce the robot weight and keep the cost low. The robot hip is fixed on a 1D linear guide rail so that we can focus on the leg extension function for hopping. The total mass of the robot is 2.8kg. The thigh and shank segment length is 0.27m.

Each motor is equipped with a incremental encoder to measure the motor angle. The encoders are used for both low-level current control and high-level reflex based control. A force-sensing resistor is mounted underneath the foot to detect if the robot is in the stance phase or flight phase. An ESP32s microcontroller reads all the sensor data and sends the data to the high-level controller. The high-level control is implemented in realtime at 1kHz with Matlab Simulink xPC target (Matlab R2018a, Mathworks Inc., USA). The motor drivers and the microcontroller are interfaced with the xPC target machine through EtherCAT communication bus.